[Disclosure: Please assume all outbound links may in some cases provide site-sustaining revenue from ads or referrals (with never any extra costs to you). See footer for more details. Thank you] 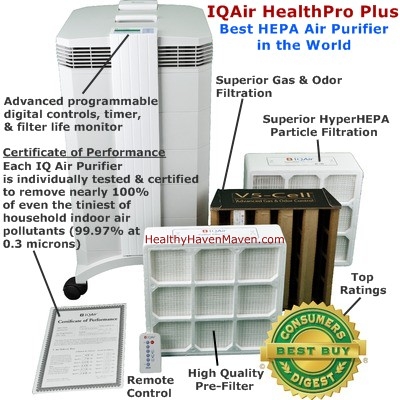 How the IQAir HealthPro Plus Air Cleaner Works: 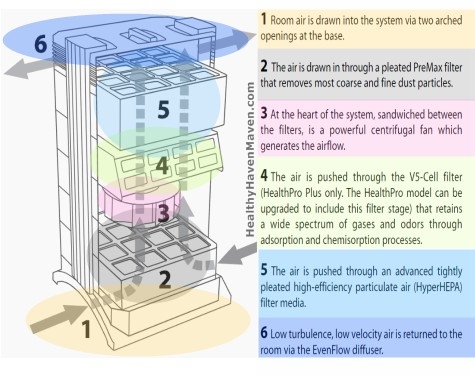 Diagram of the IQ Air Purifier PreMax Pre-Filter for Capture of Course Particles Such as Dust, Pollen, and Mold Spores 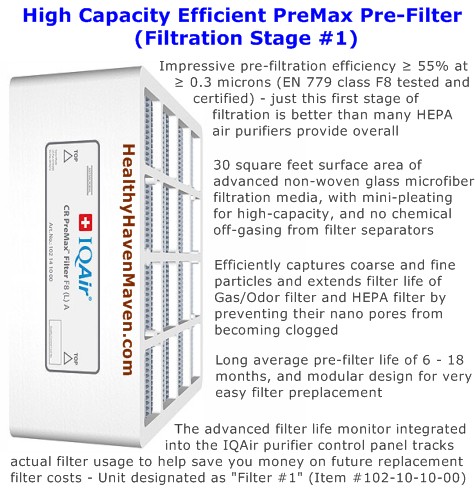 If you need to purchase replacement PreMax Pre-Filter for your HealthPro Plus, look for Art. No. 102 10 10 00 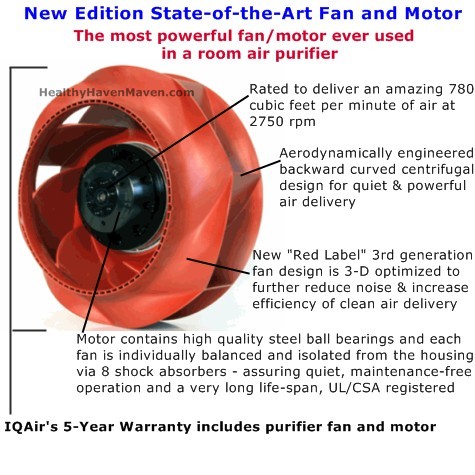 Diagram of IQ Air HealthPro Plus Chemical and Odor Filter Stage #2 & #3, A Primary Benefit Over Other Home Air Cleaner Models 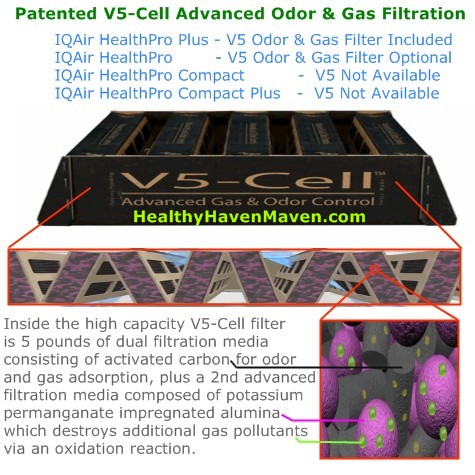 The HealthPro Plus V5 Chemical Gas and Odor filter makes this the top chemical air purifier in the HealthPro series and among the best worldwide for removal of those tiniest and most health damaging of toxic gas molecules that can diffuse into our bloodstream after being inhaled.

These Volatile Organic Compounds, VOCs as they are known, are a major cause of Sick Building Syndrome and indoor allergy symptoms, in addition to being suspected contributors to many other long-term chronic diseases, cancer, neurological disorders, lung disease, and organ damage.

I would NEVER invest in a home air purifier that did not include both high capacity HEPA and chemical gas filtration. The IQAir HealthPro Plus air purifier has that and more. It is even the preferred choice for those people diagnosed with Multiple Chemical Sensitivity (MCS).

That says a lot because those inflicted with MCS usually require the purest air possible since they are the canaries in the coal mine of indoor air pollution. Even trace air contaminants can cause a severe allergic response in this individuals.

MCS sufferers often know very well that most basic air cleaners are little more than dust collectors without the ability to capture chemical gases, much less the finest of solid particulates.

And if average room air cleaners do have gas filtration, the filters are usually only carbon-based, with no activated alumina. And the amounts are a pound or less, and often just a dusting of the filter fibers so marketers can add chemical removal ability as a hyped up marketing blurb.

But the amount of chemical filter media is very important to capture odors and VOCs efficiently and for an extensed period of time without the media becoming saturated too quickly.

The IQ Air HealthPro Plus is the best air purifier for odor and chemical removal because it contains a whopping 5 pounds of a two stage gas/odor filtering media consisting of special pelletized high-grade activated carbon and potassium permanganate impregnated alumina.

Not only is this a very impressive amount of gas-phase filtering media, but it is also highly advanced because it both captures odors and gases and even destroys some airborne compounds through an oxidation reaction provided by the activated alumina spheres.

Diagram of the IQAir HealthPro Plus Hyper HEPA Filter for Superior Filtration of Ultra-fine Particles Such as Viruses, Bacteria, Combustion Particles, and Low Levels of Cigarette Smoke 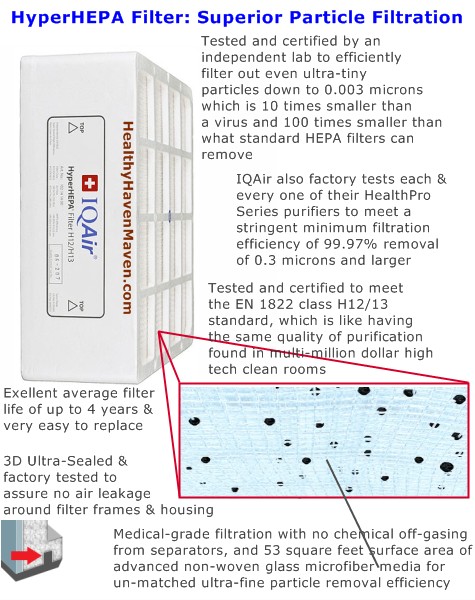 Unlike most home air purifiers, the HealthPro Plus IQAir air purifier with HEPA filter will capture and remove even viral bodies and bacterial cells from your indoor air.

So it can even help control the spread of infectious diseases. This is an important feature for anyone with a weakened immune system or who may be suffering or recovering from a disease or respiratory illness.

Highly efficient viral filtration is a major reason why the HealthPro Plus was chosen for use in hospitals to help remove the SARS virus from air during the last major outbreak in Asia.

The HyperHEPA filters also has a much higher capacity which allows it to collect more particles for a longer filter life than average. Thus replacement filter costs tend to be lower than many other inferior brands currently on the market.

If you are looking for replacement HealthPro Plus HyperHEPA Filters look for Art. No. 102 14 14 00

Compare Price, Ratings, and Reviews of IQAir HealthPro Plus with other Models in the Series with this
Home Air Purifier Comparison Chart of IQ Air HealthPro models

Return to the index of healthy home tips

Have your say about what you just read! Leave me a comment in the box below. 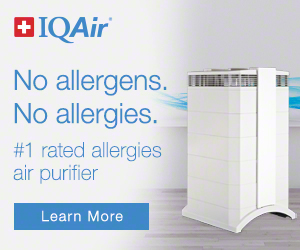 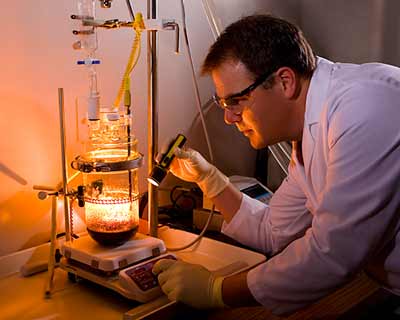 About the Scientist at Your Service

A key to removing sources of air toxins in your home is to know what those sources may be. It's often not obvious. So the smartest move you can make is to first test your indoor air quality which can help you predict what specific pollutant sources may be causing your symptoms and poisoning the air your family is breathing. 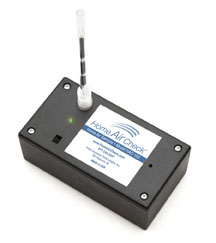 Let's get started in the smartest way possible...Here is the highly advanced, accurate, very affordable and easy to use pro-grade test kit used by healthy home experts and professional inspectors, BUT without the huge middle man mark-ups or need for an expert to run test or interpret results. You just flip a switch...

* Welcome to Home Air Purifier Expert.com! I sincerely hope this growing body of free healthy home information helps you and your family live longer healthier lives. That's my mission and I spend a lot of my personal time and money to keep this a useful free & growing resource available to everyone. Like most websites, this one also costs a lot to keep live and growing every year. So for fair disclosure I do want you to know that in order to defray some of these high annual costs and to keep the information here forever free, I do apply the standard practice of including a small amount of paid advertising, referral links, or other forms of compensated links/content within most pages. Rest assured that clicking any compensated links will never mean extra costs to you in any way. To the contrary, my affiliate partners often allow me to make available to you many exclusive promotions and deals on healthy home products, as well as secret coupon codes for special discounts on top-rated allergy control products.  These are uncommon extra savings you might not have had access to otherwise. It's a win/win/win. Please assume that clicks or sales made through any links leading from this site to other sites may in some cases result in a small payment to me (the owner and editor of this website), and I thus reinvest earnings back into advancing this website to help more people. I am VERY discerning and I carefully research and proudly endorse only the highest quality solutions I would use, or do use myself, and which I feel will provide great value to you. I share only my honest opinions and experience independent of any compensation relationships. By using this website you indicate your understanding that any outbound links (leading off this website) may provide site-sustaining revenue. Thank you for any support of my industry-leading partners, which in turn supports my mission to help create healthier homes worldwide. Please also read the following terms, disclaimers, policies, and disclosures: